The main altarpiece was a collective effort.
In 1673, Jérôme Rochus, a master-sculptor from the region of Milan, worked on the altarpiece with his team. Following a dispute with the parishioners, the craftsmen left Villaroger. An up-and-coming sculptor, Jean Marie Monino, from Valsesia, on the other side of the Alps, took over the work with his associates.

The Rosary altarpiece: in 1788, the sculptor, Zanolli, was commissioned by a religious Brotherhood to carry out a very precise order. The cost estimate was drawn up by the Brotherhood of Penitents, amounting to some 80 livres and 8 sous, although their accounts indicate that they paid additional sums to cover the price of materials.
The order was set out verbally, as well as in figures and drawings, to seal a reciprocal agreement.
In 1741, there was consternation in the village. The church bell tower was destroyed by lightening.
No one knows if all the bells were broken in the incident but the 1766 bell, which escaped destruction during the French Revolution in 1794, bears the inscription (in Latin) "Lord, deliver us from lightening and storm." This prayer was, perhaps, enough to protect the bell...but not the bell tower!
In 1945, when war had given way to peace in the Upper Valley, lighting struck again: this time hitting the crest of the rooster at the top of the spire, hurling the metal animal to the ground! Second time (un)lucky! 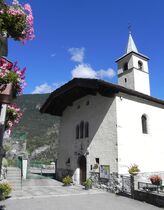